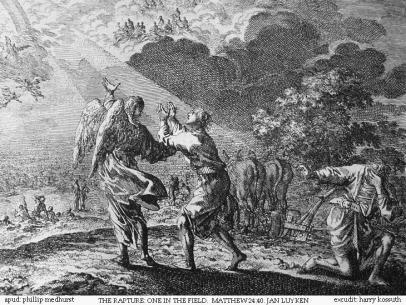 Behold, I shew you a mystery; We shall not all sleep, but we shall all be changed, In a moment, in the twinkling of an eye, at the last trump: for the trumpet shall sound, and the dead shall be raised incorruptible, and we shall be changed. (1 Corinthians 15:51-52, KJV; cf. 1 Thessalonians 4:15-17)

Furthermore, the clear-cut understanding about the particular “mystery” referred to in 1 Corinthians 15:51-52 also was not revealed during the Old Testament times. Instead, in God’s own time, the Holy Spirit has made known the hidden nuances associated with this “mystery,” but only to the New Testament’s genuinely full of the Holy Spirit believers in Christ—the real Bride of Christ.

Now, while the Scriptures say that humans are appointed a time to die a physical death, and then they must undergo judgment (cf. Hebrews 9:27; Genesis 3:19; Ecclesiastes 3:20), the “mystery” apostle Paul writes about, which is the same “mystery” the Holy Spirit reveals, is that not every person who believes in Jesus the Christ will experience a physical death, before His Second Coming—before Jesus the Christ’s bodily return!!! As apostle Paul confirms in 1 Corinthians 15:51-52 and 1 Thessalonians 4:16-17, when Jesus the Christ returns to “snatch up” His CHURCH, the dead in Christ will rise first—their old bodies will be resurrected as glorified ones—and then their changed bodies will unite with their eternal spirits and souls. Furthermore, their glorified bodies will not be subject to diseases, sin, or death. After that, according to the apostle Paul, the living Christians will be “caught up” in the air where they will receive their glorified bodies as well, but the difference is that their perfected bodies will come as a result of their “translation” (their “Rapture”) rather than by way of a resurrection. However, just like the dead in Christ, living believers’ glorified bodies also will not be subject to diseases, sin, or death.

Because living Christians are going to be “caught up” or “snatched up” instead of resurrected, the apostle Paul, in 1 Corinthians 15:51-52 and 1 Thessalonians 4:17, obviously is describing the “Rapture,” even though the actual word, “Rapture,” is not in the modern English translations of the Holy Bible. True believers, especially those individuals who are being led and taught by the Holy Spirit, know that the apostle is speaking about the “Rapture,” because the Scriptures are clear about these Bride of Christ believers being “carried off” of this planet.

So then, in 1 Thessalonians 4:17 of the Latin Vulgate Bible, which is an early translation of the Hebrew Old Testament and the Greek New Testament, Jerome translates the Koine Greek word harpagēsometha, which is the passive voice and future tense of harpazō, into the Latin word, rapiemur, from which comes the English word “Rapture.” Moreover, from the Latin Vulgate Bible, the commonly used Latin words rapiemur, rapturo, raeptius,and raptus are all forms of the Latin word rapio, and the root word rapio means “to seize, to drag off, to carry off, or to snatch away.” 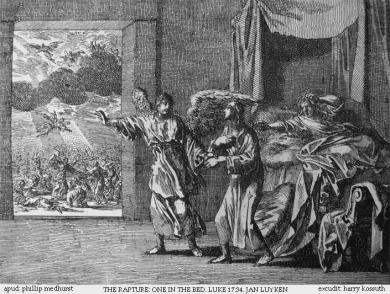 What cannot be disputed is the fact that in the modern English versionsof the Holy Bible, the New Testament Greek word, harpazō, which literally means a sudden and physical withdrawal, often is translated as “caught up,” “taken up,” or “snatched up”; thus, the next prophetic event, which is the “Rapture,” is in the Holy Bible. It is just that most of the translators who work on English versions of the New Testament use phrases like “snatched up” when they refer to this prophetic event.

Snatched up, indeed! Whatever words people want to use when they refer to the “Rapture,” true believers can rest assured that the “Rapture” sure enough is going to be the Greatest Snatch ever, because it will save God’s true believers from the hellish Tribulation Period!

Can I get some down-home hallelujahs?  Let the redeemed of the Lord say so! AMEN.

For additional information, please read my blog posts: The Bridegroom Is Coming: God’s Ultimate Marriage Story; Who IS Rapture Ready?; Countdown to the Rapture; and Ready or Not, It’s Rapture Season

1 thought on “The Controversial MYSTERY: The Rapture”