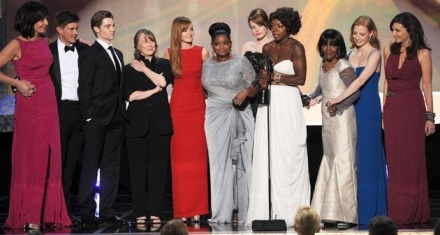 The Help . . . 18th Annual SAG Awards Winner For Outstanding Performance By A Cast In A Motion Picture

…If you get rid of unfair practices, quit blaming victims, quit gossiping about other people’s sins, If you are generous with the hungry and start giving yourselves to the down-and-out, Your lives will begin to glow in the darkness, your shadowed lives will be bathed in sunlight. I will always show you where to go. I’ll give you a full life in the emptiest of places—firm muscles, strong bones. You’ll be like a well-watered garden, a gurgling spring that never runs dry. You’ll use the old rubble of past lives to build anew, rebuild the foundations from out of your past. You’ll be known as those who can fix anything, restore old ruins, rebuild and renovate, make the community livable again. ~ Isaiah 58:9b-12, MSG

Kudos go to Viola Davis not only because of her SAG award for Lead Actress in The Help but also because I love her speech about racism AND sexism. She made this speech after The Help won the Ensemble SAG award for Outstanding Cast in a Motion Picture. She said: “The stain of racism and sexism is not just for people of color or women. It’s all of our burden.” Then she added: “I don’t care how ordinary you feel, all of us can inspire change, every single one of us” ~ 18th Annual SAG Awards, Shrine Auditorium, Los Angeles; as aired January 29, 2012 on TNT

Kudos also to Octavia Spencer and the cast of The Help for the SAG awards they also received. Concerning Octavia, she also is an outspoken actress, and she has been on a roll this season, having also won the Golden Globes and the Critics’ Choice Movie Awards for her performance in The Help.

It apparently wasn’t easy for these actors to make The Help, the big-screen adaptation of Kathryn Stockett’s best-selling novel about the injustices southern domestics faced during the 1960s. The sad truth is that today racism and sexism no longer stand front and center on the American stage. In their places are tolerance and equality. As a result, racism and sexism, as well as many other “isms,” are standing behind closed curtains.

Put differently, in a world where racism AND sexism are hardly the top items on the list of pressing issues for American citizens, it always is refreshing to hear those courageous few Americans, especially those individuals who are seen as being celebrity actors, let the world know that, where racism and sexism are concerned, they are not just playing roles but are indeed very much aware of the fact that racism and sexism still occupy a place on the American stage. In reality, the truth is that the issues of racism and sexism will continue to remain relevant to those people who know and acknowledge that there are minorities who are hugely underrepresented.

Contrary to popular opinions, as a whole, the world is NOT getting any better. Consequently, the embarrassing fact is that, as a whole, humans’ treatments of other humans are less than exemplary! But, what the heck, since racism and sexism aren’t directly affecting us, we figure that because there are not that many people who are speaking out about racism and sexism these days, then, as far as the issues of racism and sexism are concerned, everyone must be doing okay! Talk about burying our heads in the sand!

The bottom line: Racism and sexism in America are as American as apple pie. For this reason, American faith communities must function as 21st century’s spiritual gatekeepers who are preventing the admission of the evils of envy, strife, and divisions that ceaselessly endeavor to weaken the Body of Christ by gaining a foothold through the undefended areas of individual believer’s spiritual life (cf. 1 Corinthians 3:3, KJV; Galatians 5:19-21; James 3:13-16).

For sure, as spiritual gatekeepers, we cannot be passive benchwarmers/spectators and bystanders. Instead, we must aggressively be involved in the discipling of each other, making sure every member within our faith communities not only knows how to put into operation but also is using the spiritual ways God has provided for us that help us guard the entrance to our own hearts so that we can keep out whoever or whatever is unclean, and that includes the discrimination that is inherent in racism and sexism. Let there be no doubt, racism and sexism are surely the sinful and harmful traces of an outdated system that was created primarily to strengthen the power that is in the hands of the few!