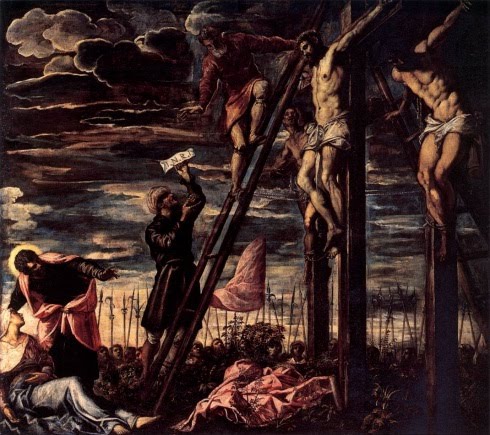 Jacopo Tintoretto’s The Crucifixion of Christ

These are the appointed feasts of the Lord, the holy convocations, which you shall proclaim at the time appointed for them. In the first month, on the fourteenth day of the month at twilight, is the Lord’s Passover.

And the Lord spoke to Moses, saying, ‘Speak to the people of Israel and say to them, When you come into the land that I give you and reap its harvest, you shall bring the sheaf of the firstfruits of your harvest to the priest, and he shall wave the sheaf before the Lord, so that you may be accepted. On the day after the Sabbath the priest shall wave it.’ ~ Leviticus 23:1-11, ESV; the underlining is this blogger’s emphasis

Despite the fact that America’s Good Friday (2012) falls on April 6th and Passover falls on April 7th, the first day of the Jewish first month (Abib/Nisan) traditionally has been the first day of the Jewish religious or festival year. This day, biblically speaking, is Abib/Nisan 14th, and this day is better known as the Passover Feast, which usually isn’t celebrated on a Sabbath. However, to be absolutely accurate, Passover could fall on any day of the week!

Furthermore, the Passover Feast, like all ancient Jewish festivals, always begins the evening before the date that it appears on American calendars. For example, as previously mentioned, American calendars note that Passover starts on April 7, 2012, so that would mean that, if this Passover were in keeping with the biblical Passover Feast, then it would begin on the evening of April 6, 2012, because a Jewish day traditionally has been from sunset to sunset (twilight to twilight). Then too, if this Passover were like the ancient Passover Feast, then it also would begin with the customary Jewish family dinner (the Passover Seder meal of lamb and unleavened bread, etc.).

Biblically and historically, the Passover Feast is both the meal and the ceremony (the commemoration of the biblical Israelites’ exodus or the time when they were freed from their slavery in Egypt). This Passover Feast immediately precedes the first annual Sabbath of seven annual Sabbaths (High Sabbaths) of the Feast of Unleavened Bread, which is celebrated on Abib/Nisan 15th. Then too, because the Passover Feast commemorates the Israelites’ exodus, this is the reason why no leavened bread is eaten during the week of Unleavened Bread.

Furthermore, biblically speaking, Jewish individuals, especially all Jewish men in their early 20s, and older, are commanded to keep the Passover from generation to generation, which means forever (cf. Exodus 12:14 ). This God-appointed time (Passover) is why Christ Jesus is in the God-appointed place (Jerusalem), during His Passion Week. The author of The Gospel According to Saint Luke writes:

Then came the day of Unleavened Bread, on which the Passover lamb had to be sacrificed. So Jesus sent Peter and John, saying, ‘Go and prepare the Passover for us, that we may eat it.’~ Luke 22:7-8, ESV

For the record, a sacred annual Sabbath or High Sabbath, like all Sabbath days, is from sunset to sunset. However, unlike the weekly Sabbath days, the sacred yearly Sabbath is a memorial of God’s appointed time (mo’ed). In fact, the sacred yearly Sabbaths also are memorials of the great events scheduled on God’s Sacred Calendar, such as the prophetic dates fixed for the past fulfilled signs, as well as the prophetic dates fixed for the fulfillment of future signs.

Then too, on every Sabbath, no matter if it is a yearly (High) or weekly (regular) Sabbath, there would not be any work, and work for the Jewish people would be sowing, plowing, reaping, binding sheaves, kneading, baking, cooking, slaughtering, and so forth (cf. Exodus 20:8-10). However, even though all Sabbaths are days of rest and spiritual enrichment, the sacred yearly or High Sabbath differs from the sacred weekly or regular Sabbath in that the sacred weekly or regular Sabbath always begins on Friday evenings around 6 p.m. and ends on Saturday evenings around 6 p.m. (from sunset to sunset). Additionally, the sacred weekly Sabbath is a memorial of God’s creation of the world.

The point here is that Jesus the Christ did not die on Good Friday, because “the day of Preparation” mentioned in Mark 15:42, John 19:14 and 31 is the day before the yearly or High Sabbath. Now, traditionally, “the day of Preparation” for the Passover, which in the Hebrew language is called Erev Pesach (literally, Passover eve), begins on the evening of the Passover Feast, meaning it begins during the night hours of the Passover Feast. On Erev Pesach, Jewish people, in obedience to the biblical command and in order to prevent the accidental eating of leavened bread, would remove all leaven and leavened products from their homes (cf. Exodus 12:15).

This removal of leaven definitely had to be completed before the week of Unleavened Bread started, so by the evening of the Feast of Passover (Erev Pesach or Abib/Nisan 13th), the Jewish people had to have performed the Bedikat Chametz ritual, making sure to dispose of any remaining chametz (leaven). Only after this ritual had been completed could a Jewish home be considered chametz-free and ready for the Passover Feast and the week of Unleavened Bread.

It is important to note here that a Jewish hour occurring between sunset and sunrise is called a Jewish Night Hour. A Jewish hour occurring between sunrise and sunset is called a Jewish Day Hour.  Then again, as already mentioned, a Jewish day is from sunset to sunset (it begins at sunset on the night before the day listed on a Jewish calendar), which means a Jewish 24-hour day both ends AND begins at sunset, as well as means a Jewish holiday spans two days on the western or Gregorian calendar. For example, if Abib/Nisan 14th were listed as beginning at sunset on Thursday, then it actually would be observed after sundown on Abib/Nisan 13th (Wednesday) and during the daytime hours of Abib/Nisan 14th (Thursday).

Having said all that, it is time to look closer at Jesus the Christ’s Passion Week. During His Passion Week, “the day of Preparation” was the Passover Feast (Abib/Nisan 14th), which started during the Jewish night hours on Wednesday of the western or Gregorian calendar, and ended during Jewish day hours on Thursday of the western or Gregorian calendar. More important, it is at the 9th hour (3 p.m.) of “the day of Preparation”/Passover Feast (Abib/Nisan 14th) that Jesus died (cf. 1 Corinthians 5:7).

Concerning the Passover Feast (Abib/Nisan 14th) also being “the day of Preparation”), which is the day before the yearly or High Sabbath, the Scriptures prove this truth. Also, as mentioned earlier, the term Passover stands for both the Passover Feast day and the week of Unleavened Bread, as indicated in Mark 15:42 and John 19:14. Additionally, apostle John writes:

Since it was the day of Preparation, and so that the bodies would not remain on the cross on the Sabbath (for that Sabbath was a high day), the Jews asked Pilate that their legs might be broken and that they might be taken away. So the soldiers came and broke the legs of the first, and of the other who had been crucified with him. But when they came to Jesus and saw that he was already dead, they did not break his legs. But one of the soldiers pierced his side with a spear, and at once there came out blood and water. He who saw it has borne witness— his testimony is true, and he knows that he is telling the truth— that you also may believe. For these things took place that the Scripture might be fulfilled: ‘Not one of his bones will be broken.’ And again another Scripture says, ‘They will look on him whom they have pierced.’ ~ John 19:31-37, ESV

It is because the Lord died on the Passover Feast that Christ Jesus is now every born again and saved believer’s symbolic PASSOVER. He, indeed, fulfilled God’s prophetic event that pertains to the Lord becoming the sacrificial lamb Who would take away the sins of the world (cf. Isaiah 53:7; John 1:29, 36; Acts 8:32; 1 Corinthians 5:7; 1 Peter 1:19), and He did so on God’s appointed time (mo’ed) of the Passover Feast, which is Abib/Nisan 14th.

Once again, a Jewish day ALWAYS begins at sunset or evening, and a Jewish 24-hour day runs from sunset to sunset. Therefore, during the week of Christ Jesus’ Passion, the Lord arose some time after the 72-hours ended, which back then was on Abib/Nisan 17th. In other words, around sunrise, while it was still dark and, therefore, long before the daylight hours of the first day of the week (Sunday, or the day of Firstfruits, Abib/Nisan 18th), which during the Passion Week followed the weekly or regular Sabbath), Christ Jesus arose from the grave. The Scriptures support this truth, for apostle John writes about the Lord’s resurrection, saying:

Now on the first day of the week Mary Magdalene came to the tomb early, while it was still dark, and saw that the stone had been taken away from the tomb. So she ran and went to Simon Peter and the other disciple, the one whom Jesus loved, and said to them, ‘They have taken the Lord out of the tomb, and we do not know where they have laid him.’ So Peter went out with the other disciple, and they were going toward the tomb. ~ John 20:1-3, ESV