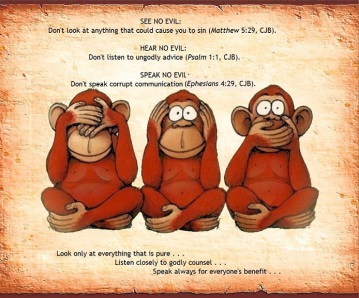 If your right eye makes you sin, gouge it out and throw it away! Better that you should lose one part of you than have your whole body thrown into Gei-Hinnom. ~ Matthew 5:29, CJB

How blessed are those who reject the advice of the wicked, don’t stand on the way of sinners or sit where scoffers sit! ~ Psalm 1:1, CJB

Let no harmful language come from your mouth, only good words that are helpful in meeting the need, words that will benefit those who hear them. ~ Ephesians 4:29, CJB

There are many proverbs that most people who frequently repeat them often also mistakenly believe that their wise sayings come out of the Holy Bible. Their wrong thinking is why they often quote their well-known maxims by introducing them this way: The Bible says . . .!

Last but not least is the widely accepted proverbial principle of do not think in any evil way, which is expressed in the pictorial maxim of the Three Wise Monkeys who “hear no evil, see no evil, speak no evil,” which is discussed later. However, even though the “see no evil, hear no evil, speak no evil” wise saying also is a non-biblical proverb, there are several biblical Scriptures that support this proverb’s principle, which also is discussed later.

According to numerous sources, the origin of this last mentioned adage can be traced back to the Chinese philosopher Confucius. Many scholars believe that Confucius’ disciples included a written, longer version of the “see no evil, hear no evil, speak no evil” wise saying in The Analects of Confucius, their collection of moral and ethical principles and ideas attributed to Confucius, which they compiled in the form of dialogues between Confucius and his students from the 4th to the 2nd century B.C.

In said work is a conversation that Confucius supposedly has with one of his disciples, Yen Yüan. They are discussing what perfect virtue is. Purportedly, this student asks his master if Confucius would give him, Yen Yüan, the steps to the process of achieving perfect virtue, to which Confucius replies:

Indeed, from this quotation, and from all the sayings included in The Analects of Confucius, come these overall themes: A man should live a principled life; he should not think in any evil way; he should educate himself; and he should contribute to the betterment of society.

Numerous sources also mention that there are countless people who believe the traditional story about a Chinese Buddhist monk being the one who introduced to the Japanese, sometime during the 8th century A.D., both the monkey, as a symbol of the cyclical nature of human life, and the Confucian “see, hear, and speak no evil” philosophy. Moreover, it is widely known that, in the 17th century A.D., a Japanese sculptor, Hidari Jingoro, carved a pictorial adage of the Three Wise Monkeys (one who is covering his ears with his hands, another who is covering his mouth with his hands, and the third one who is covering his eyes with his hands). This Japanese sculptor’s wood carving is still on display at the Tosho-gu Shrine in Nikko, which by train is about 43 to 50 minutes from Tokyo. More important is the fact that his craftsmanship is one reason why the Tosho-gu Shrine is now a World Heritage site. Indeed, said shrine was made famous because of the shrine’s Three Wise Monkeys wood carving, located over the entrance to the Shinkyusha (Sacred Stable), and the shrine’s lavishly decorative Yomeimon gate, both of which show a heavy Chinese influence.

Concerning the wood carving of the Three Wise Monkeys, there are many people who believe that the Japanese sculptor’s pictorial maxim was created largely to convey the Japanese’s age old play on words: “mizaru” (see no evil), “kikazaru” (hear no evil), and “iwazaru” (speak no evil). Be that as it may, what’s more important to note here is the source that so many contemporary images of the iconic Three Wise Monkeys ape. Most people agree that that source is the Japanese sculptor’s pictorial maxim, which still hangs on the outside wall of the Shinkyusha.

The Three Wise Monkeys panel is one of the 8 panels that are hanging on the outside wall of the Shinkyusha or Sacred Stable, and these 8 panels not only tell a story about three monkeys (“mizaru,” “kikazaru,” and “iwazaru”) but also these 8 panels express a way of life. The panel of Three Wise Monkeys, who “hear no evil, see no evil, speak no evil,” is the most famous of the 8 panels on the stable’s wall at the renowned Tosho-gu Shrine in Nikko, Japan.

Despite when and how the Three Wise Monkeys’ pictorial maxim began, as mentioned earlier, while the “see no evil, hear no evil, speak no evil” proverb cannot be found in the Holy Bible, the proverbial principle that this saying expresses does have some biblical support. In addition to the above cited three verses (i.e., Matthew 5:29, Psalm 1:1, Ephesians 4:29), there are several other Scriptures that convey the same recognizable proverbial principle of never thinking in any evil way. One of those other Scriptures is Isaiah 33:15. The prophet Isaiah writes:

He whose life is right and whose speech is straight, he who scorns getting rich by extortion, he who shakes his hands free of bribes, stops his ears against talk of bloodshed and shuts his eyes against looking at evil. ~ Isaiah 33:15, CJB

Clearly in this verse Father God teaches that believers, His children, should make every effort to “speak no evil, hear no evil, and see no evil.” More important, the believers who are living holy and righteous lives are the individuals who consistently and intentionally have chosen not to see, hear, or speak any evil. The point here is that the believers whose lives are “right,” those who walk righteously, also will have “speech [that] is straight.” They also will “[stop their] ears against talk of bloodshed,” and they will “[shut their] eyes against looking at evil.”

There can be no doubt that, at one time or another, we ALL have heard Christians, as well as secular people (either non-believers or professed believers who are living like the world), say that what we hear and what we see have much to do with whether or not we not only are speaking godly truths but also living holy and righteous lives. Therefore, the Divine Truth that can be found in the Holy Bible is that Father God wants His children, and the Lord wants His disciples, to strive to be holy in every aspect of life—to see no evil (to not look at anything that can cause us to sin), to hear no evil (to not listen to ungodly advice), and to speak no evil (to not speak corrupt communication)!