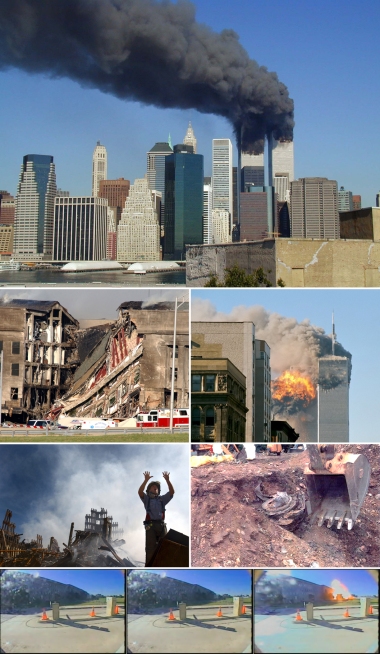 Collection of photos related to the September 11 attacks, meant to be used as the infobox image for that article on Wikipedia.

No doubt many of us have heard, time and time again, the following benediction: May the Lord watch between me and thee, while we are absent, one from another. Yet, I wonder how many of us know the real meaning of this classic benediction, recited by countless pastors, and other spiritual leaders, at the end of a Saturday or Sunday worship service.

The well-known “May the Lord watch between me and thee, while we are absent, one from another” benediction actually comes from the Holy Bible. It is in reference to the Mizpah (Mizpeh) or watchtower—the heap of stones piled up by Jacob and Laban. The first time this Mizpah (Mizpah) is mentioned is in Genesis 31:48-50:

Now, it is obvious that this Mizpah (Mizpeh) was meant to be both the covenant Jacob and Laban entered into AND a landmark of the boundary between them, these two extremely incompatible and hostile men (cf. Genesis 31:48-54). More important is the fact that Jacob and Laban’s covenant to agree to disagree also means that these potential hotheads needed the Almighty God to watch over them so that they would be sure not to break their covenant. Therefore, it is clear that their Mizpah (Mizpeh) symbolizes the presence of God, which then and now watches over the emotional bond between people who either are separated by moralistic differences, or geographical distances, or physical death.

The abovementioned benediction and its history indeed relate to this day in American history, especially in respect to Americans’ bone of contention, which is the Islamic Terrorists who caused the 911 deaths, emotional and physical pains, and the piles of rubble where the Twin Towers used to be. That is why, on this anniversary of September 11, 2001, as Americans remember the Islamic Terrorists’ senseless plan to take innocent lives, to create trauma and sicknesses, and to leave behind uncalled-for fragments of broken glass and concrete slabs, as well as the pieces of contorted steel, Americans also should remember the Ground Zero Cross that miraculously appeared on September 13, 2001, standing almost upright in the rubble—the demolished World Trade Center 6—that was caused by the  landmark Twin Towers’ debris.

From that day until this present day, this intact crossbeam that first appeared in the middle of the crater beneath 6 WTC’s rubble, but now is in the National September 11 Memorial & Museum, has been more than pieces of steel coincidentally shaped into an identifiable Christian icon. This Ground Zero Cross also is a symbol of joyous hope, enduring faith, phenomenal healing, and inalienable freedom. Therefore, Americans should let this symbol be a reminder that the Lord indeed is watching “between me and thee, while we are absent, one from another.”