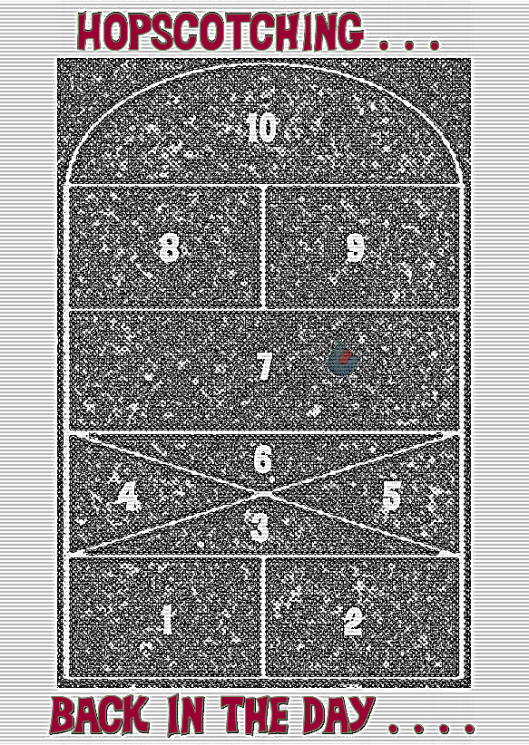 So let’s do it—full of belief, confident that we’re presentable inside and out. Let’s keep a firm grip on the promises that keep us going. He always keeps his word. Let’s see how inventive we can be in encouraging love and helping out, not avoiding worshiping together as some do but spurring each other on, especially as we see the big Day approaching. ~ Hebrews 10:22- 25, MSG

Some people have maintained that Hopscotch (the game) originated as a pagan ritual involving the retrieval of an object—a pagan ritual that supposedly the early Christian “Church” assimilated and over time reduced the ritual to a child’s game. This Christianized pagan ritual that became a child’s game is said to have had some eschatological symbolism embedded in the names given to the top semicircle. Since the last shape on a hopscotch court either was called paradise or crown of glory, a hopscotch court supposedly represented the soul progressively moving from Earth to Heaven.

However, other people have maintained that if a Christianized pagan ritual had received symbolic eschatological names, such as the names given to the highest shape on the hopscotch court, those hopscotch court names that supposedly had Christian beliefs embedded in them have been overlaid with symbols that suggest a totally different foundation. Some people have believed that in place of the alleged symbolic eschatological names of paradise and crown of glory are common worldly stages symbolized by the hopscotch court’s squares, triangles, rectangle and semicircle. These shapes represent a person traveling to a dangerous place, picking up an object, and returning back home safely. Other common worldly symbols people have said are represented in the hopscotch court’s shapes are rites of passage—the various important stages of life.

This blogger suggests that, if there really were some embedded Christian beliefs in the eschatological names used to symbolize the semicircle on the hopscotch courts early Christians might have used, the 21st century’s symbols representing “church-hopping” probably have overlaid those prior symbols’ foundations. While some believers might think it is wise to visit many local churches before deciding which “church home” is best for them (i.e., “church shopping”), the truth of the matter is—if God is not the One who is adding these Christians to a particular “church home”—many of these “church shoppers,” who select a “church home” for themselves, eventually will end up “church-hopping”—going from one “church” to another without committing to any particular “church” for any significant amount of time.

God’s design is for believers to live in a community with a group of born again, saved, and Holy Spirit filled believers. Sometimes that isn’t possible, for example, if the towns or cities in which Christ followers live have no local churches that remotely resemble the first-century ekklesias. Nevertheless, wherever and whenever there is no fellowshipping with likeminded believers, there usually will be professed Christians who are less concerned about reaching lost souls, less concerned about the nation’s moral condition, and less concerned about making a difference in this sin-sick world. In other words, where “church-hoppers” are concerned, it is doubtful that they will be progressively moving from glory to glory—moving from Earth to Heaven.

A word to the wise should be sufficient. Amen.